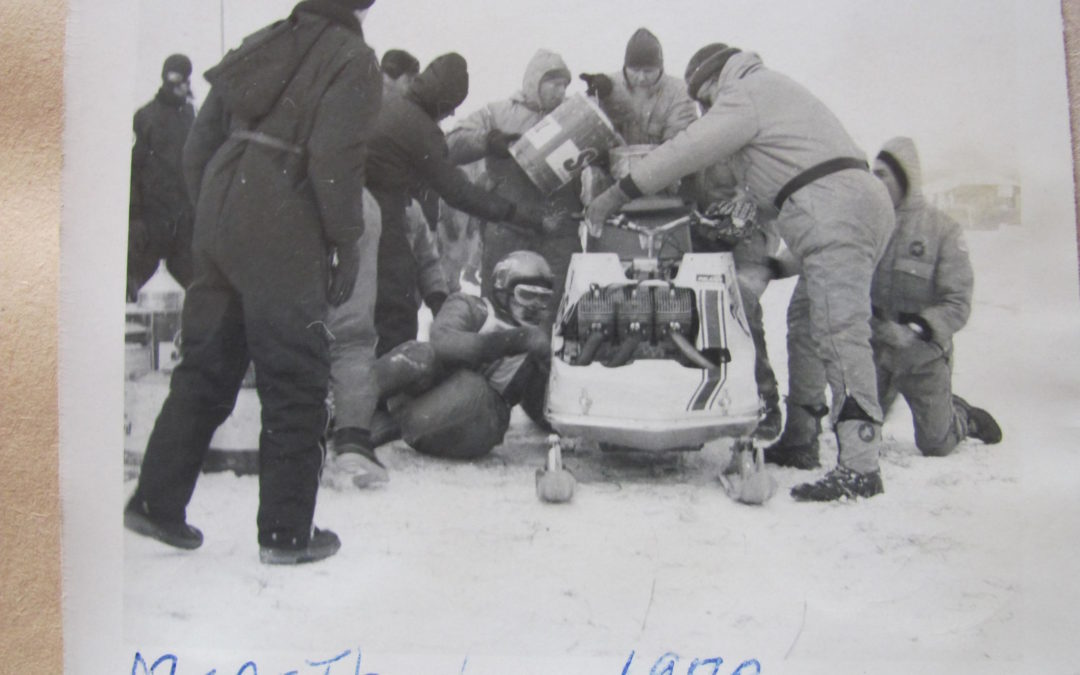 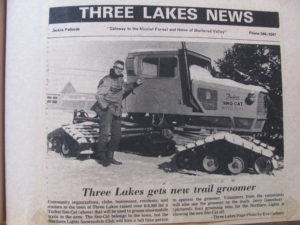 The year was 1966 when a group of local snowmobilers recognized the benefit the new sport of snowmobiling could bring to the small north woods town of Three Lakes.  In those years, the only trails that existed were old forest road and hiking trails.  There was a real need to develop a trail system that would eventually connect all area towns such as Eagle River, Rhinelander, Sugar Camp and beyond. The Three Lakes club was formed in 1966 but wasn’t officially named until 1967 when the daughter of  Chicago Cubs and Philadelphia Phillies outfielder  Cy Williams, Marjorie Williams Estes Peschke came up with the name of ‘Northern Lights’.  She is the same charter member that volunteered to start and maintain a club ‘scrap book’ which has proven so valuable in tracking our history. The first president was Don Fancher and anyone in town that owned a snowmobile joined the club.  It’s hard to believe that there was a cap on membership in those days and those that were late to sign up were put on a waiting list.  Dues were $5.00 per person and $10.00 for a family membership. The membership was very active, not only developing the trail system but also with rides,  cookouts in the woods over an open fire, overnight rides which always seemed to be a challenge and great fun. Three Lakes is very rich in snowmobiling history.  Our home town hero and charter member George Gensler was the first ‘World Champion’ in 1965.   His family has been very gracious allowing our club to display much of his snowmobile racing memorabilia at our exhibit at the Three Lakes Historical Society. Northern Lights hosted the Summer World Championship Grass Races attracting thousands of spectators to the Snowmobile park on the 4th of July.  The races included both grass drags and a leman’s type course which always proved challenging.    The park, now known as Don Burnside Park was one of the first purchases supporting snowmobiling.  It is also the site of the Hodag 50 pit stop in the late 60’s.  The Hodag Cross Country race was a challenging race from Rhinelander, to Three Lakes, Sugar Camp and back to Rhinelander. Northern Lights was one of 5 northern Wisconsin clubs that saw the need and stepped up to create a state organization which we have all come to know as the Association of Wisconsin Snowmobile Clubs.  Members of the five clubs realized if legislation wasn’t pass quickly to protect trails, they would be lost as fast as they were developed.  Northern Lights & Three Lakes had the opportunity to host the 1971 convention at the Alpine Motor Inn, now known as The Oneida Village.  From all accounts, it was a great success.  Charter Member Dick Brewster served as Vice President on the AWSC board while working for the National Forest Service. Three Lakes also saw one of the first ‘touring’ companies.  Charter Member Duane Tillman promoted his ‘Sno-Sport Safaris’ using his fleet of Rupp Sno-Sport sleds, taking groups into the Nicolet for bonfires and cookout and all around great times.  He introduced many newcomers to the sport of snowmobiling. The Scholwin family, also members of Northern Lights owned and operated SnowGoer Magazine with headquarters right in Three Lakes.  The publication was later sold but is still in production today. Through the years, trails were added with the intent on connecting with surrounding towns.  Then Trail Boss, Dan Terrisinski worked with his counterpart in the Eagle River Club and representatives from the National Forest to get approval to connect the popular Kimball Creek Trail with Eagle River’s trail system.  It was a major link benefiting Forest County, Three Lakes and Eagle River area’s.   Dan and his wife Sis both went on to become President of NLSC. By the early to mid ’80’s, the club was struggling to maintain the 100 plus miles of trail.  After some poor winters and fewer volunteers to do fund raisers, plus the high cost of maintaining the unreliable groomers, Northern Lights members found they were unable to continue to be the sole maintainer of the trails.  A new organization was formed to do all trail work.  The New organization was named Three Lakes Trails and they continue to do an outstanding job of maintaining the over 200 miles of trails they are responsible for which go all the way to the Michigan border. (This article was published in March 2018 Issue of  the AWSC Wisconsin Snowmobile News.) 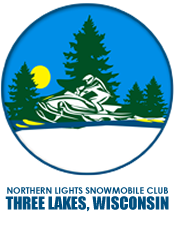 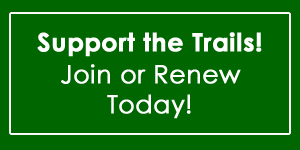